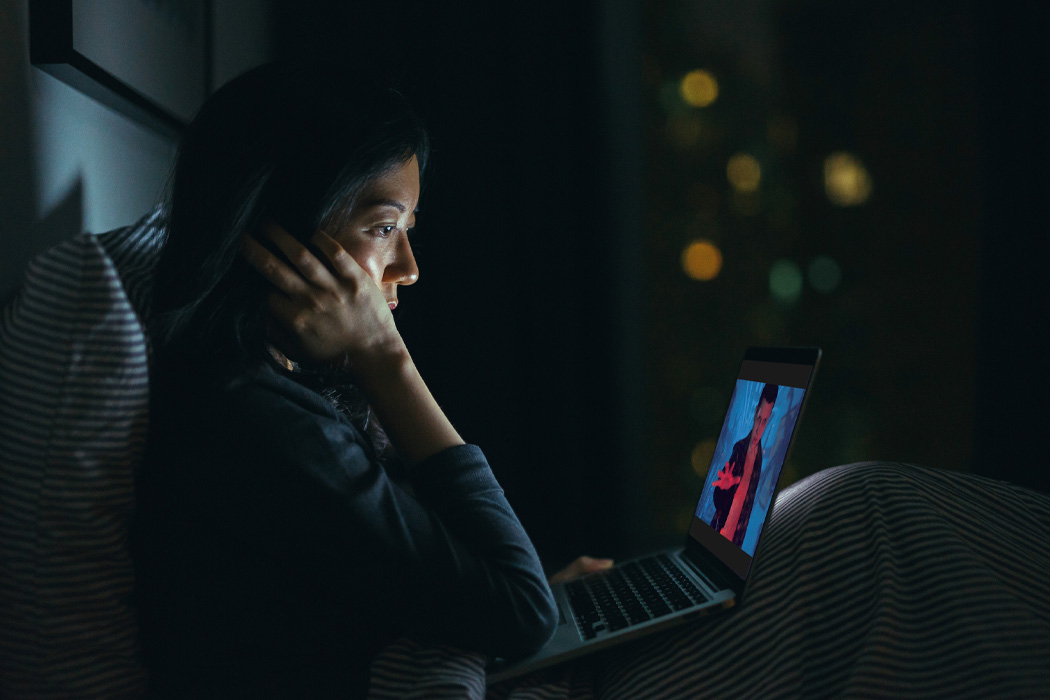 The streaming industry grows stronger each year, giving the users close to an infinite amount of content to watch. Thousands upon thousands of movies and TV shows just one click away. And the premise is simple - watch whatever you want, whenever you want. Sounds great, right? In reality, streaming services exploit our relatively newly founded thirst for video-on-demand. No wonder the average user spends almost 20 minutes each streaming session scrolling on a platform searching for something to watch. In this guide, we break down the reality of streaming and look at our streaming habits.

We have all been there. Cuddled up on our sofas, in the perfect mood and ready to watch something when all of a sudden our partner, mom or cat asks us to “just pick something.” A wave of panic and stress hits you. Just pick something. Of course. Easy. Nothing too bloody or too romantic though. Also, nothing slow-paced, no sci-fi, action, or comedy. Just pick something. You have Netflix, HBO, and Amazon Prime at your disposal. It’s out there. That one movie which would be perfect for this exact moment. Now you just have to find it, preferably before your dinner gets cold. Queue the endless scrolling.

We spend on average 20 minutes per streaming session on just trying to find something to watch. That racks up to almost 10 hours each week, 115 hours each month and in total over 300 days in one lifetime on just scrolling. Within those 20 minutes and with all that energy spent scrolling, we are more likely to rewatch movies or TV shows we have already seen - just to watch something - and give up on finding new content. What can we take from this? Maybe too much freedom when deciding what to watch makes us overwhelmed and too reliant on rewatching stuff we know we like. In that, we limit ourselves to explore our taste and preferences.

A way to avoid scrolling endlessly is to define our taste in movies. If we know what we like, we can narrow down our search tremendously. How do we define our taste? Believe it or not, your personality has a lot to say when it comes to what movies you like and dislike. Find out how here!

85% of U.S. households have at least one video streaming subscription, while the average is four subscriptions. To prove what we touched on before, almost 50% said the amount of different streaming services was becoming overwhelming. We know the feeling. And who can blame us? Netflix alone has over 17.000 titles globally on their platform. Amazon has roughly 24.000. If you add three or more platforms to the equation, we are talking about thousands upon thousands of movies and TV series to choose from. Like finding a needle in a haystack, the task of “just pick something” becomes almost impossible.

After years of steady growth in popularity and more active users, streaming services have cultivated a new standard when it comes to consuming movies or TV. Nostalgics will always prefer going to an old, dusty place we like to call the movie theater. Back in its glory days, the movie theater was one of the few (if not the only) places people would go to consume movies. It was a “happening” - something to do. A welcomed break from staying at home and enjoying some well-deserved entertainment.

Today, on the other hand, the cinema has succumbed to our new viewership habits. This is the first time a generation is growing up watching Netflix while still in their strollers. Teenagers are no longer going to the cinemas to hang out, they go home and stream the latest trending reality show. The truth hurts, but movie theater-goers are a dying breed.

In the U.S alone, the audience streamed almost 170 billion minutes of content each week. It can be hard to grasp just how many minutes we spend on streaming platforms, but to make it a bit more comprehensible, 170 billion minutes translates to well over 350.000 years of continuous watching. Each week. That is a lot.

Let’s put that into perspective. The human species evolved “only” 315.000 years ago. If we were able to travel back in time and hand over a TV with Netflix on it to the first humans, and made them put down their spears and bows, gave them a few buckets of popcorn and they started watching that very second - they would still be sitting in front of that TV today, and still have a few thousand years left before they spent as much time streaming as the American audience did in one week. If that doesn’t tickle your brain, for the whole of 2021 Americans streamed almost 15 million years worth of content. And it keeps growing.

Reports suggest that the streaming industry will be worth over $300 billion come 2030. The industry grows approximately 21% each year. These predictions can be tied with the fact that 93% of Americans reportedly wanted to increase their streaming options or make a change to their existing streaming plan. Somehow, what we have isn’t enough. We want more. And these numbers only cover the American side of the industry - Europe, Asia, Africa, Australia and South America contribute to even more years of scrolling and watching.

There are an incredible amount of streaming platforms out there. Some say more than 200, others say 150. Truth be told, we might not know for sure. It feels like there is a new streaming service popping up every other day. Mapping all the different pieces, remembering which platforms have what, and eventually choosing something to watch is like laying a puzzle. Only this puzzle is almost impossible to finish. New content each week, updated libraries, new streaming services and an endless amount of movies and TV shows forces us to start over from the beginning everytime we try and lay down a piece. The platform puzzle never looks the same as when we left it.

In a survey by Verizon Media and Publicis Media, 67% of people said it's difficult to decide what to watch as a result of the vast amount of content. The dilemma becomes apparent. We want to subscribe to as many platforms as we can, to not miss out on anything, but in that we expose ourselves to the core of the problem: too much content to choose from.

Subscribing to multiple platforms creates another problem. The cost. Streaming has become an expensive affair if you don’t want to miss out on content. Platforms charge between $5.99-14.99 per month. 1 in 4 spend more than $75 per month on streaming subscriptions, while 1 in 10 have no idea how much they spend.

And that’s how they get us. We subscribe to Disney+ to watch Star Wars, HBO Max to keep up with House Of The Dragon, and Netflix because everybody has Netflix. Exclusive content on each platform makes us naive with our spending - we want it all.

Streaming becomes a burden when you don’t know what to watch. The task of finding something takes too long and goes against what we are promised - watch whatever you want, whenever you want. What should I watch then? To save time, we fall back on trustworthy content we have already seen. After all, our time is precious when we don’t feel like scrolling through thousands and thousands of movies and TV shows.

So what’s the solution? The easiest way to cut some time from scrolling is to prioritize which streaming platforms you want to use. Limiting yourself and your options won’t hurt your ability to watch “whatever you want, whenever you want” but save you the pain of eating a cold dinner. Or fighting with your partner. If you are seriously bored of scrolling, sign up to become a beta tester of our upcoming app and we will do it for you. Click here to sign up!