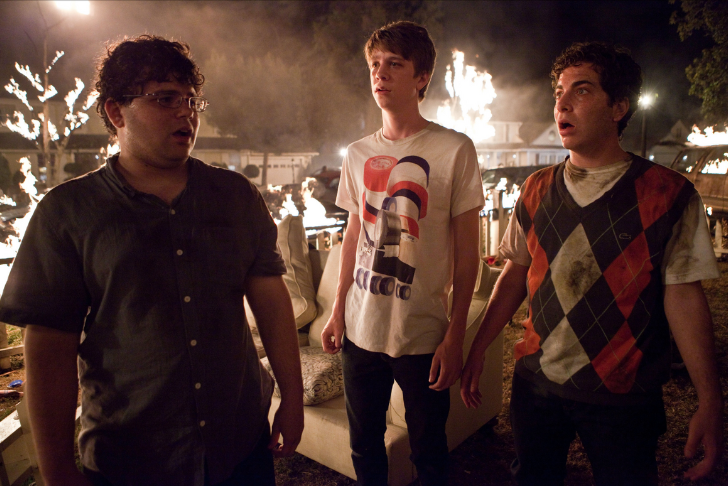 Comedy Movies To Watch With Friends

Hosting a movie night with friends is a lot of fun, and do you know what’s also fun? Comedies! We have listed a selection of good movies to watch with your friends that promises great laughs and relaxing entertainment. Everything from superheroes, spies, to teddy bears and epic parties - it’s all here. Let’s dive right in!

We are used to superheroes being cool and brave, but there aren't many of them goofy and cynical as Deadpool. He is a Special Forces operative who got fantastic abilities after an experiment and, as he sets off on a hunt for a man who ruined his life, the only two things he has are his healing power and twisted sense of humor. Having more than just a few giggles while watching it, you will understand why this movie was favored by many viewers since its premiere. Deadpool 3 was announced a few weeks back, which makes this the perfect time to start watching the first and second movie with your friends.

From the creator of Family Guy, Seth MacFarlane guarantees a hilarious time and great laughs with this movie. When John Bennett was a kid he wished that his teddy bear would come to life, and by laws unknown to nature, it actually happened. All grown up, John now has to choose between his relationship with his girlfriend or his childhood friend, the talking teddy bear, Ted. This is definitely a good movie to watch together with your friends.

A well made and very funny spy movie? Yes, please! In this one, Melissa McCarthy plays a desk-bound CIA analyst who volunteers to go undercover to infiltrate the world of a deadly arms dealer to prevent a global crisis. As a sort of parody of typical spy films, this movie is for sure a great laugh. Think James Bond, but funny. In other words, a great movie to watch together with friends.

Annie turned her life into a mess and, though she is unhappy with her choices, she continually makes the same mistakes. However, when her best friend Lillian tells her she got engaged, Annie's primary goal becomes to be Lillian's maid of honor. As she competes for this position with Lillian's new friend Helen, both ladies reveal their ridiculous and infantile side. Is Annie capable of justifying the trust Lillian gives her? This is a hilarious movie about friendship making it a great choice for a movie night with friends.

Dubbed as a kind of cult movie nowadays, Project X is no ordinary feature film. When three high-school seniors throw a birthday party to make a name for themselves, the night spirals out of control and the party becomes much bigger than they could ever have imagined. Shoot in a documentary-style fashion, you’ll almost feel like you are at the craziest party ever. Some say this is the most epic party movie ever, which is why you have to enjoy it together with your friends.

Stupid but a lot of fun is one way of describing this movie, which also makes it a perfect choice to watch with friends. Tag is about a small group of former classmates who organize an elaborate, annual game of tag that requires them to travel all over the US. After playing for 30 years, the tradition is at stake as one of the friends in the group decides he has had enough. In short, this is an underrated and very funny movie that reminds us to live life to the fullest.

Mr. Bean turned spy, what’s not to love? In this sequel, Johnny English, an accidental secret agent who doesn’t know fear or danger and the most unlikely intelligence officer in Her Majesty’s Secret Service, must stop a group of assassins before they eliminate a world leader and cause global chaos. A simple story and a hilarious performance by Rowan Atkinson that guarantees laughs from you and your friends. In short, a great comedy!