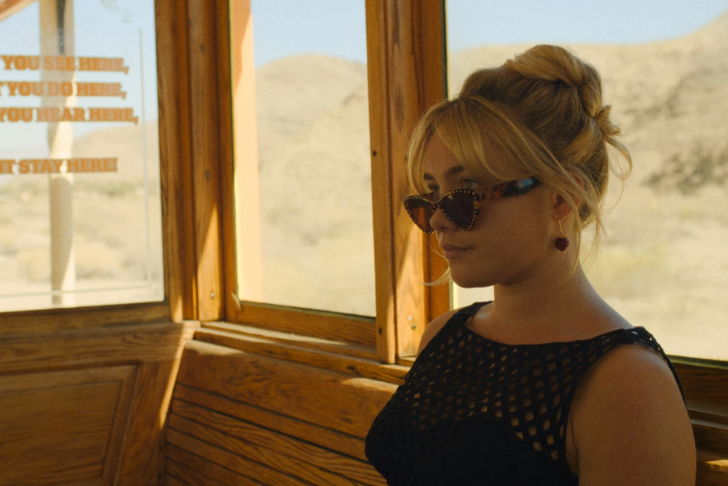 Okay, where to begin? Like peeling away the layers of an onion, Don't Worry Darling has become something more than just a movie. Underneath the surface, an ocean of scandals, love triangles, disputes and unimpressed fans overshadows the anticipation and hype for the actual movie. Or the hype of seeing Harry Styles in a movie again. Who knows. Now that Don’t Worry Darling is finally streaming on HBO, we’ll take a look at what happened behind the scenes with during production as well as what the fans have to say. This may be one of the biggest movies of the year…but for all the wrong reasons.

Starring a few of the biggest names in the entertainment industry right now, Don’t Worry Darling looked promising with an exciting cast of upcoming superstars. Directed by Olivia Wilde, and featuring Florence Pugh, Harry Styles and Chris Pine, this thrilling drama had an interesting story on the table.

Set in an unspecified time period, but heavily inspired by the flourishing and colorful 1950s aesthetics, Alice (Florence Pugh) and Jack Chambers (Harry Styles) live in a suburban neighborhood in Victoria, California. While the men go to work at the Victory Headquarters out in the desert, the women stay at home to clean, cook…and relax. The women are urged not to ask their husbands about work or even venture out in the desert.

One day, Alice sees a plane crash out where she is not suppose to go. She hurries to the crash site only to stumble onto a small mirror-covered building. It just so happens to be the Headquarters. She is curious and while touching the building, she experiences unexplainable hallucinations. As the days go by, the hallucinations grow stronger and more vivid.

To summarize, a sort of dystopian society based on old principles and gender roles from our past. Once Alice touches the Headquarters, the harrowing reality of her surroundings starts to unravel. Florence Pugh shines  as Alice, while Chris Pine and Harry Styles also put on great performances. An interesting plot with great names portraying complex characters - but what happened behind the scenes?

Without peeling away too many layers of this onion, there is some tea to spill that went down during production. The first round of drama  occurred when the cast was first presented in 2020. Shia LeBeouf was set to star alongside Pugh but was later replaced by Harry Styles after falling out with Olivia Wilde. Let’s just say that they didn’t get along - which is not unusual to happen between actors and directors in Hollywood.

Attentive fans may have also noticed that Pugh has retracted from promoting the movie with her co-stars and Olivia Wilde. The official statement is that a scheduling conflict with filming Dune: Part Two has kept Pugh busy, but there are reports that states Wilde and Pugh clashed a few times during the production of Don't Worry Darling. Apparently, they shouted and screamed at each other. In other words, their relationship was short-lived.

It doesn’t end there. Harry Styles and Olivia Wilde started dating after shooting Don’t Worry Darling, which led Wilde’s now ex-husband, Jason Sudeikis to serve her divorce papers. Although not official, it is said that the couple of seven years went separate ways before filming began. But who knows? Nevertheless, Hollywood tabloids have had numerous field days with the scandals and dramas surrounding Don’t Worry Darling.

All of these headline scandals have left some to believe that all of it was a clever marketing scheme, which could be true. It was a long time ago a movie got this much attention for anything but the actual movie. If it was all just to promote the movie (in a highly unusual way), there is one question we should be asking: was it worth it?

Now, this is going to be tough. As with a lot (A LOT) of movies, there will always be some that hate it and some who love it. The story is the same with Don’t Worry Darling. There is no doubt that Florence Pugh gave a wonderful and thrilling performance as the curious housewife. Her talent is unprecedented.

Same goes for Chris Pine, although a few fans felt his characters lacked depth and complexity. Harry Styles can also be categorized as “good, but not good-good” for his performance. Don’t Worry Darling sits at a mediocre rating of 6.2 on IMDb, and movie critics share the same feeling towards it as IMDb users. A recurring topic is that of Pugh’s acting skills, but also Olivia Wilde falling short as the director of the movie.

CLICK HERE TO WATCH THE MOVIE ON HBO MAX

Looking for something else to watch?
Check out these two article:

Release Radar: What To Watch This Week