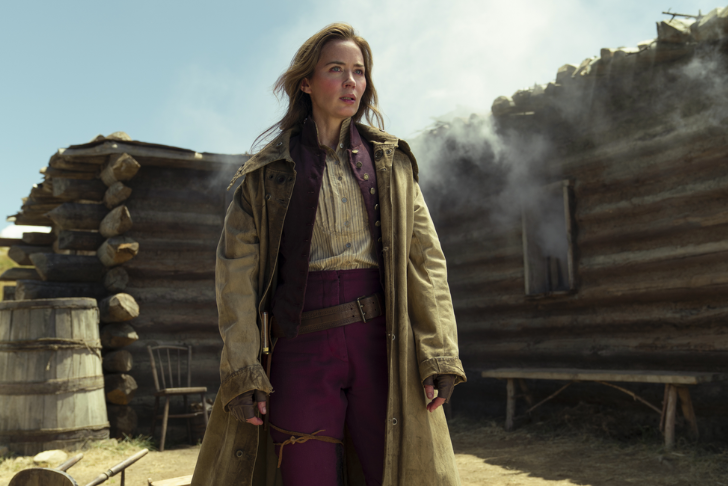 Every other week, we let our release radar do its thing and find the best new releases on streaming platforms. Once again, a hefty and interesting batch of new movies, TV shows and documentaries has been caught in our net, and we have listed them right here in this article. Prepare for the World Cup with an insightful documentary about the FIFA organization or follow a convict running from his criminal past in Bombay. There is drama, action and romance lurking in any of these recommendations. Let’s find you a new release to watch this weekend!

The Western genre tends to divide viewers into those who enjoy them and those who don’t. However, if Emily Blunt stars in one, we are all bound to enjoy it no matter what. And that is the case with this new TV series. We follow Blunt as Cornelia Locke, a mother who seeks revenge for the death of her son, as she pairs up with an ex-cavalry scout and embarks on a life or death journey through the West. Brilliantly written and with strong characters, The English is a new release you should definitely check out. Perfect for a weekend binge-watching session.

Harry Styles has been in the headlines recently after starring in Don’t Worry Darling which was released on HBO last week. If you want to see more of him, My Policemen is the perfect match for you. This new movie follows the relationship between Patrick, Marion and Tom spanning over 40 years. In a sense, it is a classic story of a forbidden love triangle. Harry Styles once again proves to be a decent actor in this familiar yet surprising story. If you enjoy a slower paced romantic movie, My Policemen is a good new movie to watch.

With the World Cup starting this weekend, we figured a eye-opening documentary about the FIFA organization could prove to be a fitting watch. If you are a football fan, you are probably familiar with the corruption and scandals surrounding former FIFA president Sepp Blatter. This documentary gives an insight into the greed and immoral actions of FIFA and explores sports washing - a term used to describe how someone uses sports to try and cover up wrongdoings. This is an important new release to watch.

Harry Styles is not the only cast member from Don’t Worry Darling to feature in a new release this week. The wonderful Florence Pugh stars in The Wonder, a story that takes place in the 19th-century. When English nurse Lib Wright learns about a young girl who stops eating but remains alive and well, she travels to a little village to observe the girl. Surviving months without food, the question of how the girl survives proves to be a mystery hiding a darker story. The Wonder is a slow-burning, psychological-thriller that once again confirms the talent that Florence Pugh possesses. She is brilliant in this new release, and we think this could be one of the best movies on this list to watch this weekend.

Back in 2020, Millie Bobby Brown was highly praised for her portrayal of the wicked but curious Enola Holmes in the first movie. Now, she is back. This time, Enola is a detective-for-hire who takes on her first official case. A young girl has gone missing but to solve the mystery, Enola needs help from her friends and Sherlock Holmes himself. With a similar style and feel as the first movie, this sequel is the perfect movie to watch together with your family or kids. It is an adventure through the streets of mystery and wittiness. In short, a fun new movie to watch.

From the creators of the popular German TV show Dark comes this exciting but scary new release. Combining drama, history and horror, 1899 follows a group of multinational immigrants traveling from the old continent to the new when they encounter a nightmarish riddle aboard a second ship adrift on the open sea. If you enjoyed Dark, this new TV show will definitely be your cup of tea. In short, a must-watch mystery on Netflix.

Apple TV has quite a few high-quality TV series, and this new release could easily qualify as yet another. Starring Charlie Hunnam as a convicted heroin addict, the story follows him as he reinvents himself as a doctor in the slums of Bombay. But his ties with the criminal underworld sends him on a dangerous journey to Afghanistan where trouble awaits. Combining action, adventure and crime, this new TV series is for sure a wild but entertaining ride. Hunnam shines as Lin and will keep you on the edge of your seat. If you are looking for a new TV show to obsess over, this is the one.

Fire Of Love is the second documentary on this list and the complete opposites of men in suits corrupting football. This is the story of a couple, Katia and Maurice, and their passion and love for volcanoes. Together they unravelled the mysteries of volcanoes, capturing incredible footage and spending time around them. The very thing that brought Katia and Maurice together ultimately took their lives, but their daring footage and work remains. Fire Of Love is a great documentary to watch during a lazy afternoon. In other words, an incredible story definitely worth watching.

Feeling nostalgic? Check out these classics from the 2000s

Or do you need more fun? Here are a few adventure movies to watch