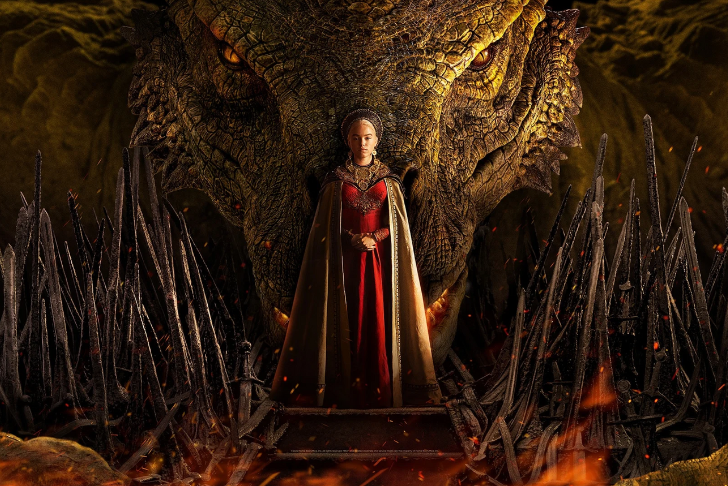 During the coming fall, we have front-row seats to a standoff between HBO and Amazon Prime. The two streaming giants go head-to-head in a heroic streaming battle with their new blockbuster TV shows set to premiere very soon. Even if both HBO and Amazon insist that this is not a tug of war, no one really buys it. House Of The Dragon will be HBO’s first of many spin-off series based in the universe created by author George R.R. Martin, which was previously introduced to the masses by Game Of Thrones. On the other side, Amazon has spent a ludicrous amount of money to create the first Lord Of The Rings spin-off series by the name The Rings Of Power. In this article, we emerge ourselves in these fantasy worlds again and prepare for what’s to come.

This week marks the beginning of an obvious streaming war, maybe the first of its kind, and we are strapped in ready for the wild ride that’s to come. This endeavor has been in the making for a few years. If you haven’t watched or even heard about Game Of Thrones or Lord Of The Rings yet, you have some serious homework to do. To keep it short, they are both arguably the biggest and most successful fantasy movies and TV series ever made.

In 2017, Amazon bought the rights for J.R.R Tolkien's Lord Of The Rings saga and plans to expand the story began immediately. With a 5-season long commitment and one billion dollars in budget (Yeah, you read that right. One. Billion. Dollars) the production of Rings began in 2020. In October the year before, George R.R. Martin and Ryan J. Condal were given the green light by HBO to start pre-production for the prequel series to Game Of Thrones which was eventually announced in 2020 to the public.

It has only been a mere four years since the last season of Game Of Thrones concluded, and what an ending it was. For all the wrong reasons. The bittersweet closure, which proved to be much more bitter, left GoT fans angry and disappointed. Some even started a petition for HBO to remake the entire last season. Complete and utter outrage from fans flooded the realms of King’s Landing and the effects still linger within fans to this day. Similar dissatisfaction can be found among LOTR fans. Although the original three movies sit comfortably on IMDb’s list over the top 250 movies of all time, the latest additions to the LOTR universe, the Hobbit movies, did not generate nearly the same buzz. In other words, both camps of fans were left heartbroken to see their beloved characters and stories leave them in despair.

Both series can be seen as prequels as they are set to take place much earlier in each respective world than previously seen. Rings takes place thousands of years before the events of The Hobbit and The Lord Of The Rings. Amazon themselves released a synopsis with key details:

“[The Rings Of Power] will take viewers back to an era in which great powers were forged, kingdoms rose to glory and fell to ruin, unlikely heroes were tested, hope hung by the finest of threads, and the greatest villain that ever flowed from Tolkien's pen threatened to cover all the world in darkness. Beginning in a time of relative peace, the series follows an ensemble cast of characters, both familiar and new, as they confront the long-feared re-emergence of evil to Middle-earth. From the darkest depths of the Misty Mountains, to the majestic forests of the elf-capital of Lindon, to the breathtaking island kingdom of Númenor, to the furthest reaches of the map, these kingdoms and characters will carve out legacies that live on long after they are gone.”

Boom. There it is. It’s tough not to get excited, right?

On the other side of a completely different world, House Of The Dragon is based on George R.R. Martin’s novel ‘Fire & Blood’ - the story of House Targaryen, a family of nobility and dragons, during a period of a gruesome civil war and shift in power. 200 years before the events of Game Of Thrones, also known as the “War of the Five King’s”, the Targaryens were a powerful house dominating all seven kingdoms of Westeros. In itself, the plot is very familiar. Who will end up on the Iron Throne? King Viserys Targaryen does the unthinkable and names his daughter Rhaenyra heir to the throne. When Viserys eventually fathers a son, his promise to make Rhaenyra queen stands to the court's surprise. As the kingdom becomes more and more divided, house Targaryen slowly starts to collapse. As once said in Game Of Thrones, “the fire is in our blood” perfectly summarizes what we can expect to see.

In the black corner, we have the TV show master, the very experienced: HBO. And in the blue corner, the new kid on the block ready to leave a mark in streaming history: Amazon Prime. This is indeed a streaming fight of the heavyweight division. There is no getting around the fact that HBO has the upper hand when it comes to experience in running a quality TV show. With the likes of Game Of Thrones, Euphoria, Sopranos, and The Wire under their belt, HBO is the reigning champion. The question is if Amazon has the capability to overthrow the old king?

Armed with an insane budget, there is certainly an opportunity for Amazon to have their own success with Rings, like the benchmark triumph set by HBO and Game Of Thrones. Rings is expected to become the most expensive TV show in history and the expectations are naturally through the roof. This really is Amazon’s “all-in move” as they battled Netflix for the rights, eventually getting the deal with an eye-watering price tag of $250 million. Season two is already set to start production this year, and three more seasons are reportedly to follow. The magnitude of this deal, the budget, and the further addition to Tolkien's world can only be compared to that of Game Of Thrones. It is now HBO’s task to try and fight back with their prequel series and protect the bragging rights of having the biggest fantasy show ever made. HBO is not spending nearly as much as Amazon on their new puppy. A reported $20 million an episode will have to do for Dragon, totaling at about $200 million for the entirety of season one. Amazon spent almost half a billion dollars alone on the first season of Rings, with the second season probably setting them back a similar amount.

Although this is a head-to-head clash, the two streaming platforms have different plans for the future. HBO wants to build an empire around George R.R. Martin's fantasy world. Game of Thrones and House Of The Dragon is only the beginning as seven more series are said to be made. For example, Kit Harrington is bound to return as Jon Snow in a new spin-off series and there is even talk of an animated show being made based on R.R. Martin's books. Like the Marvel Universe or Disney’s Star Wars galaxy, we are probably going to see a similar type of creation at HBO with content based around Game Of Thrones. Amazon, on the other hand, looks to create its first large-scale TV show, something that HBO has already done time and time again. Can Amazon pull it off is really the question we should be asking?

Even though the fight is yet to begin, HBO has already won the first round. Dragon premiers this week on the 21st of August in the US and the 22nd of August in Europe, beating Amazon and Rings by almost two whole weeks.

Aside from the business end of the deal, there is also a hungry group of fans from both sides that can’t wait to see what HBO and Amazon have been working on. As mentioned earlier, things didn't end very well for both parties. Fans felt cheated by the very thing they’ve grown to love over the years. It was indeed two dirty breakups.

There are rightfully a bunch of skeptics towards these new series from each fanbase. Game Of Thrones fans can’t seem to look past the disappointing finale of season eight, and there is a worry that the producers and directors of Dragon won’t stick to R.R. Martin's original story. This was a phenomenon that happened with the two last seasons of Game Of Thrones, which were based on unfinished work by the author. Hopefully, though, this won’t be an issue with this new series as R.R. Martin has reportedly seen every episode and praised it. When the teaser dropped, fans were impressed with what they saw.

LOTR fans on the other hand, were not as dazzled by the trailer for the upcoming first season. Despite the beautiful visuals, a unanimous feeling among fans was that of a weak story and actors that didn’t appear to be as invested in the characters as the original cast from the movies. This has split the fanbase, made apparent by two fans who said “remember, this is Tolkien’s world, not Game Of Thrones” and “it can’t be worse than the three Bilbo films, right?”.

There is a stubborn worry that Amazon has “Netflixfied” the story. What does that mean, you ask? Well, Netflix has a tendency to splash a lot of cash on big projects and great casts but eventually fall short and create a mediocre movie. Tied with this is also the general goal between streaming platforms to be as politically correct as possible, even with original content. Some fans insist that there is no need for political correctness in a fantasy world, especially not something as “sacred” as Tolkien’s world. In some ways, this also applies to Dragon as George R.R. Martin and Game Of Thrones isn’t really famous for being the most family-friendly show to watch.

There you have it. All you need to know about the two new blockbuster TV shows from HBO and Amazon. We are more than ready to once again enter these exciting fantasy worlds that we’ve missed for the last couple of years. Even though fans were left disappointed the last time they encountered dragons, hobbits, and elves, there will always be a lust for more and surely even the most bitter fans will tune in when the shows eventually air. These are the two perfect shows to watch for the coming weeks as summer slowly fades away and the snow starts to fall, and white winds blow…